Join Our Newsletter
Shop Our Store
MAIN MENUMAIN MENU
By Craig Martin on May 22, 2017 in Ohio, Safety 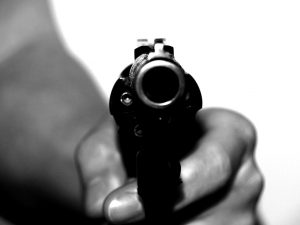 In what may be considered a nightmare scenario for most gun owners, an Akron man has been dealt the grim reality of shooting a family member in a terrible case of mistaken identity.

Kerry Bever, the 42-year-old Akron resident was at home last Thursday morning when he heard someone at the front door of his house. At the time, he believed that his daughter was at a friend’s home, house-sitting, so there was nobody he expected to be heading over. However, unbeknownst to Mr. Bever, his 22-year-old daughter was on the other side of the door, trying to get back into the house.

During this time, Kerry had already retrieved a loaded firearm from his kitchen and upon grabbing it called out to see who was at the door. There was no response.

But without the response, his daughter, who according to a police report, Kerry described as nothing more than a shadowy figure, continued to make her way into the house. Unfortunately, as soon as the front door opened, and with no knowledge of who it was, Kerry fired a shot without hesitation.

It was only after the scream of his daughter did he know the mistake that he had made.

Kerry’s daughter lay bleeding and screaming on the floor with a bullet lodged in the right side of her abdomen. Her shocked father now had to spring into action to rectify his mistake and save his daughter’s life.

Kerry called 911 where he told a dispatcher that his daughter was shot “In the side, in the side, she’s shot.”

Paramedics rushed to the scene, and thanks to their speed and the placement of the bullet it appears that Kerry’s daughter is well on the way to making a full recovery. But this story has definitely left this family shaken, and will hopefully remind others that just reacting quickly to a situation isn’t enough. The situation must be well assessed to know if the situation can be handled WITHOUT A GUN or other alternatives with the gun besides pulling the trigger.

Shooting in self-defense before a threat has been identified is not ever usually a good idea. The safer bet for the father, would have been to give a verbal warning or demand, announcing his intent to defend himself with his gun, and to do so loudly. The girl, or any other family member on the other side of the door, would surely not want to get shot, announcing who they are.

Another thing that’s important to point out, is that it’s also not a good idea to go looking for a fight, if it can be avoided. Instead, when you are home and suspect a break-in, isolate your family and defend that position as you call the police. It’s better to have the police called for no reason, than to have a family member with an extra hole.

What do you think? Would you have had more patience in this situation or do you believe you would have acted with the same response? Let us know in the comments below.