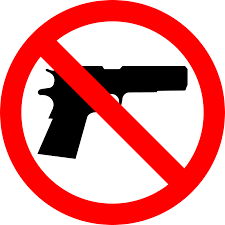 With opposition to the Second Amendment becoming increasingly fashionable, you may be seeing more and more “No Guns” signs popping up in the windows of stores you visit. If you see one of these signs you might be wondering to yourself if you should be paying any attention to them.

Could you risk legal problems if you choose to ignore that paper towel taped in the front entrance with “No Guns Allowed” scrawled across it in sharpie?

According to the Ohio state government website, any signs displayed in a conspicuous manner must be  obeyed by an Ohio citizen with a Concealed Handgun License (CHL).

Some states have very specific guidelines detailing how they are to be worded, acceptable sign designs, and placement in order to be within the law. Ohio, however, does not.

The only requirement stated within the law is: the sign must be posted in a conspicuous manner. This means, unfortunately, that paper towel meets the legal requirements if it can be easily seen.

So, what happens if you still “don’t see it?”

Violation of what? What are you risking if you are caught?

If you are caught and it’s proved you violated the posting knowingly, you can be charged with criminal trespass, a fourth-degree misdemeanor.

The severity is increased to a first-degree misdemeanor and a charge of aggravated trespass if the CHL holder knowingly ignores a posted sign at A and B type family day care centers.

The Ohio Government Codes site goes on to say:

The key here is to vote with your wallet. If that coffee shop you like to hit before work every morning posts a sign saying your gun is unwelcome there, get your cup of Joe somewhere else.

Now for the disclaimer:

I am not, nor do I ever intend to be, a lawyer so this isn’t legal advice. If you have a clarification you feel needs addressing, or if this helped at all, please feel free to leave a comment to let me know.

Read here for a list of businesses unfriendly to the Second Amendment.

And read here for an article about what places your CHL is also not valid.

Ohio: Where Your Concealed Handgun License Isn’t Valid
Ohio Traffic Stop: Are You Required to Notify Police of Your Gun?

7 Responses to Can you Get Into Trouble for Ignoring “No Guns” Signs in Ohio?