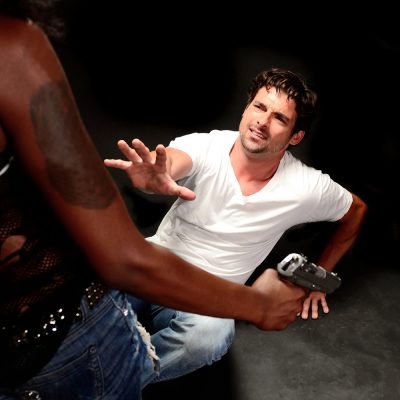 Court officials say the investigation is still ongoing, but they believe the Sanders drove 6 hours from their home in North Carolina to Ohio to attack her ex-husband, Lindsey Duncan and his wife Molly.

Law enforcement officials declined to identify the victims, but the Duncans released a public statement about the attack voluntarily.

According to the victims, they had just returned home after leaving the house for breakfast when a man suddenly appeared.

“All I remember was a 6-foot-something 6-foot-5 man, that was probably 230 pounds with a camo mask, a full camo mask and hoodie on, ran to my wife’s driver’s side with a gun, and held it about 10 inches from her head,” Lindsey said in his public statement with his attorney next to him.

“I shot them, they came up to our window and had a gun pointed at my wife’s head,” Lindsey said in the 911 call transcripts.

“The word ‘ambush’ is exactly what it was,” said Molly. “We were caught off-guard. They said nothing and they started shooting at us.”

Lindsey drew his own weapon from where he sat in the passenger seat and began shooting. When another masked person appeared and opened fire on him, Lindsey turned his attention to that attacker and returned fire.

Both attackers, later identified as Cheryl and Reed Sanders, were killed in the exchange, but neither of the Duncans sustained any injuries.

“I will tell you she (Molly) was in the middle of two separate gun battles, of bullets flying by her head, four inches, five inches, six inches by her, not one time but two separate times. And her being alive today, I’ll never be able to explain that. And it wasn’t one shot or two shots, it seemed like a hundred shots and there were shells everywhere. And that’s all I can really say, and I’ve probably said too much but that’s enough.”

Green County investigators acknowledged that surveillance video footage of the area supported the victims account of the attack and declined to press charges.

Reed, who had an unspecified criminal record, was found to be in possession of different kinds of fake identification and car tags.

Greene County Sheriff, Gene Fischer said the ongoing feud between Lindsey and his ex-wife, Cheryl, had been known to his deputies years before the shooting.

“About five years ago, the resident (Duncan) …notified us that he had received information that the ex-wife was trying to hire somebody to murder him,” he said.

While motive for the attack is still being investigated, an argument between the former couple concerning a trust fund for their adult children is suspected to be the cause for the ambush.

But Adrian King, who described himself as a family friend and mentor of Reed, disagrees with the idea of the couple traveling up to Ohio to attack the Duncans.

King said that Cheryl and her ex-husband had maintained a harried relationship when the pair divorced in 2009 after a decade of marriage.

“He (Lindsey) has given them nothing but hell ever since she (Cheryl) married him (Reed),” King said. “He didn’t like the fact that she had remarried and was happy.”

King went on to say that a trust fund set up to pay for college for Lindsey and Cheryl’s two adult daughters was a constant source of contention.

“Part of the problem is he had to sign off on wherever they went to school, and they didn’t go to the schools he wanted them to, so he refused on signing off on letting them have the money,” King said.

King also confirmed that the Sanders both carried handguns, but insists the reasons weren’t malicious but for protection.

“They carried them all the time,” King said. “She carried one in her purse, and he carried one in a little saddle in the back of his pants. They both carried guns because they were afraid of Lindsey…”

Lindsey Duncan disagreed with reports that the Sanders had only been trying to talk to the Duncans about the trust fund.

“With two weapons? With multiple clips that were loaded … ski masks?” he asked.

Cheryl had been a stunt double in the 80’s and doubled for actresses like Brooke Shields, Jessica Alba, and Cameron Diaz. She and her husband Reed owned a business specializing in fitness and nutrition in North Carolina.

Lindsey Duncan has had some notoriety himself as a nutritionist and has appeared on various talk shows including Dr. Oz.

Ambushes are the preferred method of an offensive attack. Just like Molly Duncan said, they were caught off guard by the attackers. But not completely since Lindsey had a firearm on his person.

Many of us might not strap on our pistol if we’re just running out the door for a quick breakfast, but as the situation above shows us, an attack can come at any moment. And it helps to be prepared.

Read here for the Complete Home Defense – Tactics For Defending Your Castle for the latest tactics and techniques for home defense.