Join Our Newsletter
Shop Our Store
MAIN MENUMAIN MENU
By Craig Martin on April 17, 2017 in Ohio

On Sunday afternoon, Cleveland police were receiving calls from numerous people, saying they were watching a man rant about his miserable life on Facebook and threaten to kill someone at random. As the calls came in, the police then checked the video and saw the man do just that.

The videos show Steve Stephens, 37, of Cleveland, during what has been dubbed the Easter Sunday Facebook killing. In these videos, the man seemed calm and even laughs about the pain and fear he knew he would cause the city.

His victim was Robert Godwin Jr., a 74-year-old father of nine and grandfather of 14 who walked into the path of the deranged gunman at about 2 p.m. on East 93rd Street, just after having Easter dinner with his family. Stephens filmed the shooting and posted it to his Facebook page.

Stephens’ Facebook was deactivated about three hours after Godwin was killed, but the videos were grabbed and shared by news outlets across the world and posted onto YouTube.

In the moments leading up to the shooting, Stephens pulls his car up to a curb on East 93rd Street, near the intersection with Carr Avenue, and calmly said, “I found somebody I’m about to kill. I’m going to kill this guy right here. He’s an old dude, too.”

Stephens got out of the car and approached Godwin, saying, “Hey can you do me a favor?” and asked him to say his girlfriend’s name. Godwin appeared confused but said the woman’s name. 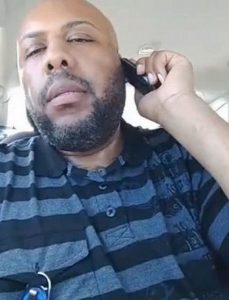 Stephens then pulled a handgun and pointed it at Godwin’s head, telling him that the woman is the reason why he was about to shoot him. Godwin’s hands went up to shield him and pleaded with Stephens, saying, “Look, I don’t know anybody by that name!”

Stephens fired one fatal shot at Godwin’s head, zoomed in on Godwin’s bloody body on the sidewalk and then walked back to his car and got inside.

Authorities searched all night for a white newer-model Ford Fusion with a temporary tag of E363630, though Cleveland police Chief Calvin Williams said at a Sunday evening news conference that the plates may have been changed.

In a second five-minute video after the shooting, Stephens is seen on the phone with an unidentified person. Stephens encourages him to go onto Facebook and watch the shooting.

He then begins explaining to the person on the telephone about why he shot Godwin, saying “I’m at the point where I snapped,” and that no one ever took his problems seriously when he tried to talk them out.

In the video, Stephens also mentions that he works for Beech Brook, a Cleveland organization that provides counseling services for youth. He was wearing his name badge in the videos that identified him as a Beech Brook employee.

He also takes a moment in the second video to blame the killings on his girlfriend, saying that he woke up on Friday and just decided that he had enough.

Though Stephens has claimed that he killed more than a dozen people, Cleveland police have said that Godwin is Stephens’ only known victim. Williams and Mayor Frank Jackson have continued to urge Stephens to turn himself in.

“Whatever concerns or problems that he’s having, we’re here to have a conversation with him,” Jackson said.

Stephens is considered armed and dangerous and should not be approached if he is spotted. Anyone with information about Stephen’s whereabouts should immediately call 911, Williams said.

Stay safe Ohioans. Make sure you and yours are protected from this madman.